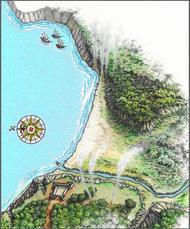 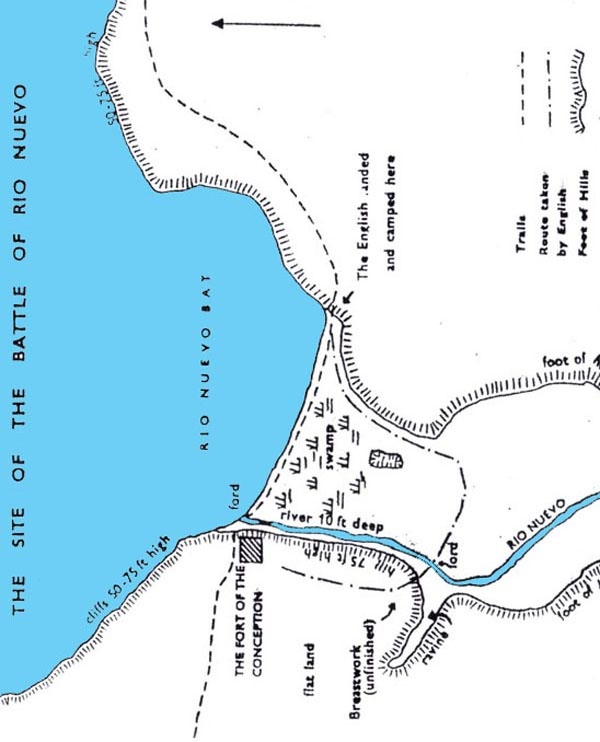 Depicted above left is a representation of the area as it may have appeared just before the battle in June of 1658. This impression is based on information from historical references and maps such as the one shown above center which is a colourized detail of a sketch-map found in S.A.G. Taylor’s definitive book, “The Western Design – an account of Cromwell’s Expedition to the Caribbean”.  Published 1965.
At above right is a map of Jamaica showing the relative position of the Bay and the site of the Battle.
Another important imagery source is a Spanish map delivered to the King in Madrid with the apparent purpose of reassuring Spain that the Bay of Rio Nuevo was well fortified and that the Spanish army, with their allies expected nothing less than glorious victory. This optimism would prove to be premature.
A detail of this map appears at the end of this narrative.

In 2000/2001 when Greg and I began preparations to build our "retirement home" on the Rio Nuevo Bay in St. Mary Jamaica... it didn't take long for us to realize that we were situated directly on one of the most historically important sites in the island.  We soon became deeply involved in the Rio Nuevo Battle Site Association (RNBSA) one of whose goal was to obtain, from the Jamaica National Heritage Trust (JNHT), custody of the Rio Nuevo Battle Site Park which had fallen into neglect in recent times.  Given my interest in history and archaeology I was appointed "Curator"... a position which I took very happlily as well as seriously!
There is much to be told here so I will start at the beginning... the story of the battle itself! 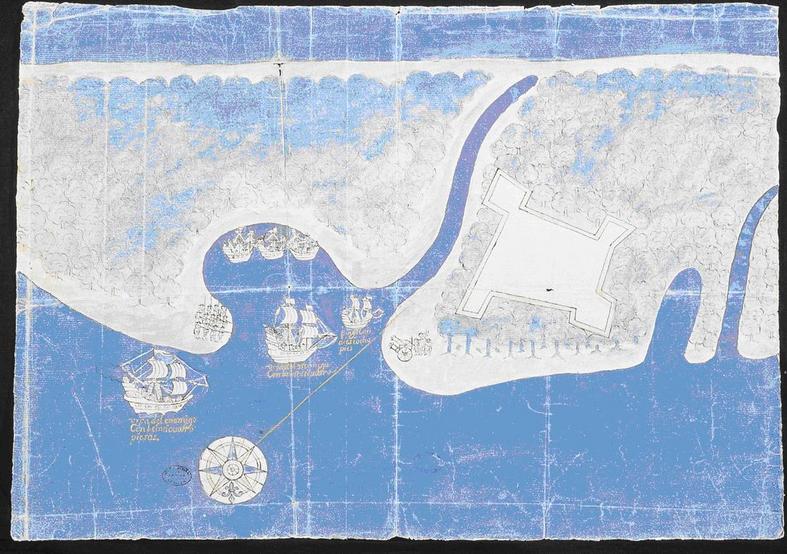 “
The original map is described in...
THE SPANISH RESISTANCE TO THE ENGLISH OCCUPATION OF JAMAICA, 1655-1660
by Irene A. Wright in Transactions of the Royal Historical Society. 1872
pg. 141 n.5
Read 8 May, 1930
5 "This coloured sketch is indeed pretty, done in blues, greens and gold. With so charming a work of art laid before him, the videroy could foresee only "credit and reputation" for his Mexican tercio. The messenger who brought the duke this map left Rio Nuevo at the end of May aboard the three transports which Ysassi forced to clear while the English were off the port, so that here we have a contemporary representation of these three vessels and of the English who attacked and were driven off. Preserved in A. de I., map portfolio (West Indies).